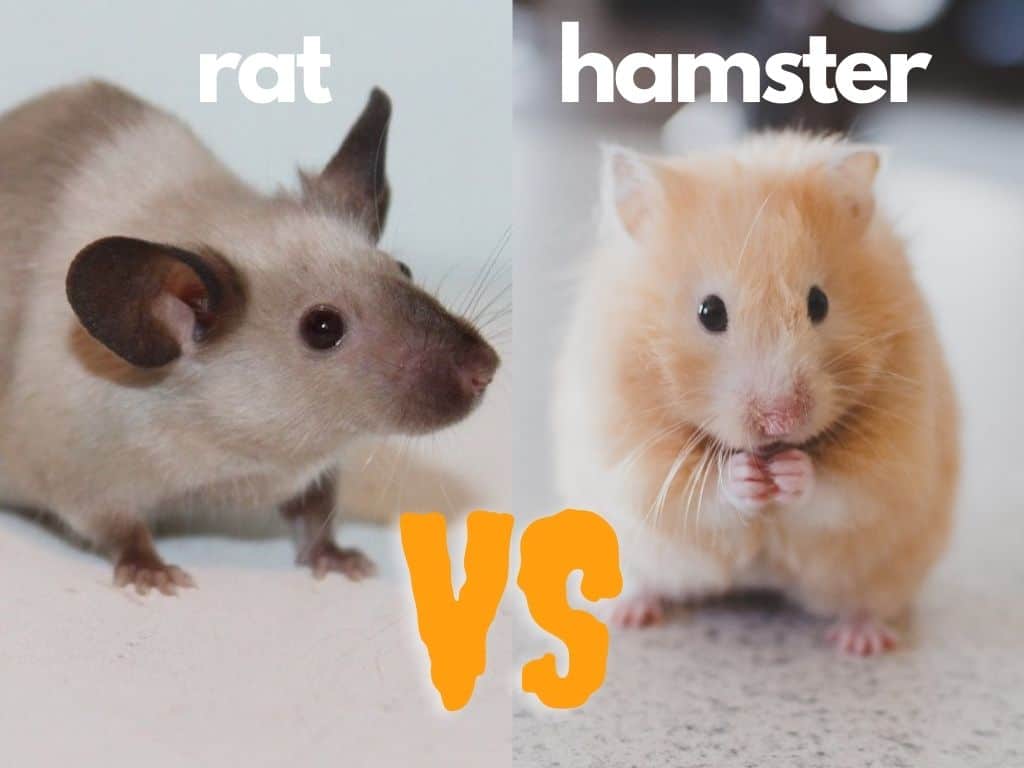 Rodents have become popular pet choices for many pet owners. Individuals looking for pets that require minimal space and attention might look at rodents as possible pets. Hamsters and rats are both good choices for pets but I recommend getting to know the differences between these two animals to help you decide which is best for you.

Both hamsters and rats are rodents, and they make great pets in their own way. They differ mainly in their appearance, sociability, intelligence, size, and overall needs. While they might come from the same family of animals, they are very different kinds of pets.

There are several aspects of both the rat and hamster that must be taken into consideration before deciding which pet is best for you. I will give you a thorough comparison of both animals so you can make the choice that works best for you.

The main difference you will notice between the rat and the hamster would be their appearance. While both animals walk on four legs and are quite small, they have very different features.

The bodies of rats and hamsters are also very different. Hamster bodies are more round than the thin body shape of a rat. Hamsters also have fur that sticks out to give them an even fuller look than that of a rat, while rat’s fur lays flat across its body.

These differences in appearances make rats and hamsters distinct looking animals that you can easily distinguish from one another.

The social preferences of a pet are important for some pet owners. Rats are known for their friendly nature towards humans and their need to be active and play. Rats get along well with other rats as well as humans, including children. They rarely bite and only do so if they feel extremely threatened.

On the other hand, hamsters are not quite as social as creatures. While they will play with their human owner, they will not go out and seek attention and would rather be left alone. Hamsters also do not get along well with other hamsters and will probably attack and possibly kill another hamster if it was forced to live in the same space.

Hamsters like to keep to themselves and rats enjoy getting out and spending time with their human and animal friends. If you are looking for a social animal that enjoys spending time with humans and pets alike, a rat would probably be your best choice.

If having an intelligent pet is important to you, then I recommend choosing a rat over a hamster. Rats are very intelligent and can recognize specific people within a family and can even do some fun tricks. Rats are easy to train and enjoy being entertained.

Since rats need their minds to be stimulated regularly, they will need some extra attention and toys to play with. Rats will not be happy sitting in a cage all day with nothing to do. They love getting out of their cage and participating in activities that activate their minds.

Hamsters do not need as much mental stimulation as a rat does. Hamsters will be properly entertained with a small ball and a wheel to exercise on. In this way, they are less high maintenance than a rat.

Hamsters and rats have similar needs when it comes to food. Both animals enjoy eating a variety of foods including:

Both hamsters and rats also enjoy eating insects and are omnivores, which means they will also eat meat. Since rats in the wild like to scavenge for their meals, rat owners like to try a variety of food items to see which kind their pet likes best.

Since both of these animals are very small creatures, they will obviously need less space than most other larger animals. Rats and hamsters enjoy living in cages since it gives them a feeling of security and comfort.

Rats are larger than hamsters so they will need a larger cage as a result. Hamsters require a smaller cage but they are not able to share their living space with another hamster. They can be very territorial and need to be separated from other animals.

Since rats are very intelligent and active animals, they need to have the space to burn energy and play. They will also need space within their cages for small toys to play with, especially if they are going to be spending a large amount of time in their cage during the day.

Rats get along with other rats in most cases and enjoy having a companion to play with. Getting an additional companion for a rat would make them happy and would also give them ample opportunities to play. Additional animals, however, will require additional space and a bigger cage.

Neither rats nor hamsters have super long lifespans. Usually, a hamster or rat can live between two to three years.

According to some rat owners, rats can live up to four or five years if they are taken care of properly. Hamster and rat lifespans also depend greatly on the variety of rats and whether or not they are well taken care of.

The social acceptance of hamsters and rats also varies tremendously. Here are some common views about rats:

On the other hand, hamsters are viewed as cute and cuddly and are well-accepted in the pet world. They are seen as loving pets who will make a great companion.

Are Hamsters or Rats Better?

Rats make great pets for those who want an intelligent and social companion. However, rats need more attention and need to be regularly entertained in order to keep them happy. They also like having companionship so it might be a good idea to get rats in pairs.

Hamsters make great pets for those who want a low-maintenance pet that doesn’t require a lot of attention. Hamsters like to keep to themselves but they are also very cute and fluffy when they are played with. Hamsters do not get along with other animals so it would not be a good idea to mix any other pets you may have with a hamster.

When considering which pet is best for you, it is important to take into consideration the various differences between pet rats and pet hamsters. Hamsters and rats differ in appearance both physically and societally. They also have different intelligence levels and a desire for socialization.

Both animals have a very similar diet and have similar needs with regard to space. However, rats do need a bit more space for their active lifestyle. They also have a similarly short lifespan which makes them great for those who do not want a long time commitment. 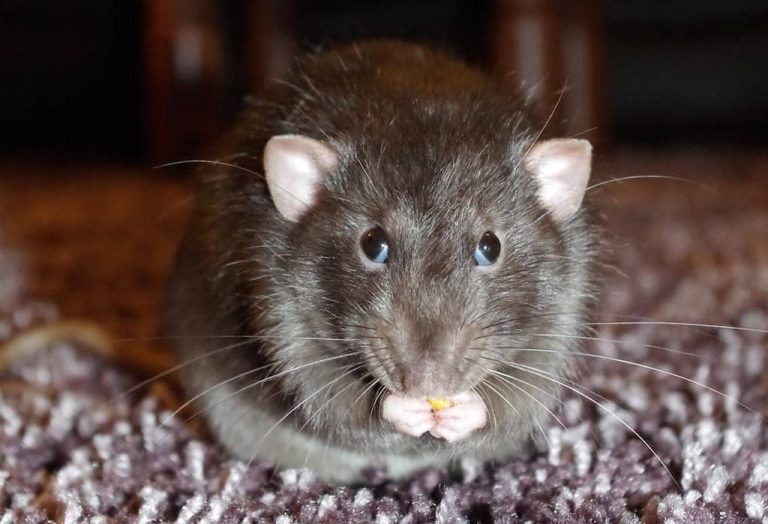 Making sure your pets are eating the right food is challenging, mainly because there are many different options out there. While rats can eat a wide array of different foods, there are some they cannot consume, and I’ll be taking a look at whether they can eat rabbit food.  Rats cannot eat rabbit food. Rabbits… Rat owners might think they’re doing a favor for the rat by offering them something similar to what cats eat. Still, there are some essential differences between these two animals’ digestive systems. Rats should not eat cat food. The rat’s digestive system is different from that of a cat and may cause an upset stomach…. 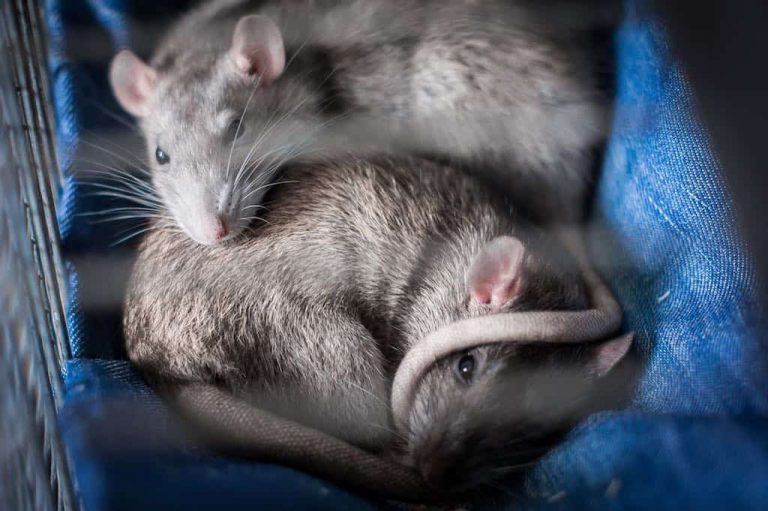 Pet rats are one of the most popular animals to own. Even though they seem easy to care for, I know that it can be tricky figuring out what they need to eat. There are specific foods that pet rats can eat and other foods that they cannot eat that will negatively impact their health. …

If you’ve had pets, you know they can pick up on a lot of cues. Some animals can seem so smart that it feels like they can predict our every move. But how do rats compare to some other pets, like dogs? Pet rats are very smart, and they are smarter than animals like gerbils,… I’m a rat enthusiast who has been caring for pet rats since I was in high school. One question that always came up when I would talk about my furry friends is whether they like to swim or not. The answer, it turns out, isn’t so simple. If your rat enjoys playing in the water,…